“There are reasons to be concerned, but ultimately there is one tremendous reason to have hope. That’s the overarching message from Dr. Vladimir “Zev” Zelenko in my latest interview for The Midnight Sentinel. We covered much more than that and the entirety of the interview is enthralling. I strongly recommend making the time to listen to the whole thing.

For complete transparency, Z-Stack is a company that sells Dr. Zelenko’s nutraceuticals and they’re one of our top sponsors. But here’s the thing. I’ve been hoping to get Dr. Zelenko on my show since long before Z-Stack became a sponsor. If they’d never become a sponsor, I still would have conducted this interview and nothing about it would have changed. The funny part is we made contact first about getting him on the show, and during the course of our conversations the representative for Dr. Zelenko told me about Z-Stack. I deal with each component separately so as not to influence the commentary.

Around halfway into the interview, I asked Dr. Zelenko to describe the endgame. We had talked about what was going on. Now, I wanted to know why, and Dr. Zelenko delivered bombshells…”

Dr. Zev Zelenko on The Intentional Murder of American Soldiers Through the Covid-Shot,and the Man Influencing Klaus Schwab’s Great Reset.

The Dr. Ardis Show interview Dr. Zelenko has a warning about Big Pharma’s threat to doctors 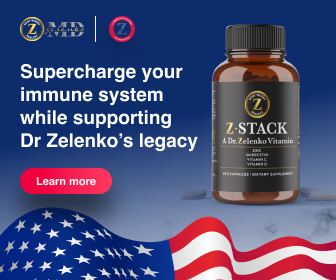